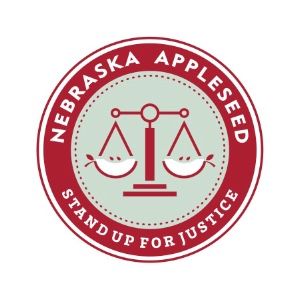 We fight for justice and opportunity for all Nebraskans across four program areas: child welfare, health care access, economic justice, and immigrants & communities.

Maria had been sick and working for years, often working two jobs to cover her medical expenses. Then, a medical emergency wrecked her life. She was uninsured and fell into the Medicaid coverage gap—earning too little to qualify for insurance, but unable to access Medicaid. The vital health care and medication she needed was out of reach.

Yet in the midst of her own struggle, she found drive and purpose in the fight for Medicaid expansion. She fought alongside Appleseed to make it a reality for herself and the 90,000 Nebraskans without healthcare.

With her warmth and spirited knowledge of the issue, she bravely shared her story and let friends, neighbors, and people all across Nebraska know that they are not alone.

Maria spent time in and out of the hospital, yet her tireless advocacy never stopped. She participated in a lobby day visit with Appleseed to bring her story to lawmakers in Washington, DC. And Maria was a key advocate in ensuring Medicaid expansion passed on the November 2018 ballot, showing Nebraskans fighting for justice are never alone.